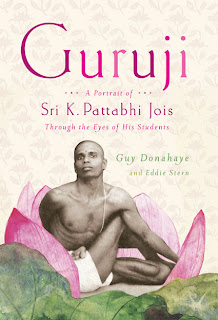 Is there a point in the book that you feel is really crucial to understand Guruji, the system, or the practice?
I feel the book makes a few important points. Perhaps nothing new is said, although for many people there will be a lot of new material. The fact that we have 30 statements or interpretations, and that these statements are broadly in agreement, or together put pieces of the jigsaw in place, what we have as a result is a kind of "authoritative" text.

Interviewees were not always in agreement and at times completely contradict each other, however, I think you can trace at least 80% agreement on most of themes throughout the book.

In some respects you could say the interviews were research on my part. For instance, on the origin of the sequences: David Williams and Nancy Gilgoff believed that the sequences we practice (with some modifications) had been passed down directly from the Yoga Korunta, a text, 100s or 1000s of years old. This was the story I received when I first started practicing since my first teacher had learned from a student of David's. I asked Guruji about this several times and was never quite sure what he meant by his answers.

Apart from Nancy and David, everyone else who was interviewed believed that Guruji was involved in creating the system of asanas. Manju goes as far as to say that Krishnamacharya and Guruji sat down and went through various texts (Hatha Yoga Pradipika, Gheranda Samhita, Yoga Korunta, Yoga Rahasya) and made up the sequences based on Chikitsa and Shodhona. Norman Allen alludes to Norman Sjoman's book and its suggestion that this type of practice is a new creation modeled on gym training.
I think, through the interviews and my own conversations with Guruji,  a picture emerges that the Yoga Korunta contained  asanas and vinyasas grouped according to their therapeutic benefits but that the actual sequences we practice were created by Guruji under Krishnamacharya's supervision based on Chikitsa, Shodhona and so on.
It seems that Guruji did much of the work in organizing the sequences as well as in modifying the vinyasas. If you look at Yoga Makaranda - Krishnamacharya's book of 1934 - you can see how he sequences the asanas and structures the vinyasas quite differently. Shammie said he invented, or discovered the surya namaskar - I believe this is true - at least in the form that he taught.

One of the reasons I made the interviews was to establish a coherent picture and to correct some misconceptions about the nature of yoga, as taught by Guruji.
Guruji felt very strongly that yoga is a spiritual practice. It is perhaps ironic that someone who believed this so deeply, is sometimes seen as propagating a purely physical practice. Too many of my fellow practitioners in the early '90s tended to think this way, and maybe this is something which motivated me to initiate this project. For Guruji, the purpose of yoga was to make one fit for realization - that was his main interest - I think this is emphasized in the book.

For many people who never met Guruji, or whose contact with him was minimal, the anecdotes and stories about studying with him and about his character have brought him to life in vivid color. For those who did know him, the interviews reveal other facets of his teaching and has brought back many memories. I have received many emails from readers expressing gratitude for having been able to experience an intimate meeting with Guruji through these interviews.

Here is an email from John Scott:

Thank you Guy, I do think you and Eddie have put together a lovely and very valuable book.

It reminds me how much we learned from each other back in those days (the early 90s).
Guruji passed on so much wisdom to every individual student, and this was because he was always on-to-one with each student, and therefore the questions asked of him were all uniquely different.

What is so nice,  is that Guruji's students love to share and pass on their personal experiences with everyone else.

The photo on the back cover looks great* and it's just as Guruji was for us back in those days.

Those were the days - the Lakshmipuram days

So again Thank You Thank You for sharing
Love John