From March 3-10, 2012 we are honored to receive Elise Espat and her group of yogis!  We wanted to know a little more about her before she came down and she was gracious enough to answer some questions for us.  There is still space on her retreat so contact us if you want to come down and join her!
Xinalani: Thanks for taking the time to do this interview with us and allowing our readers to learn more about you and your upcoming yoga retreat.  How did you find out about Xinalani Retreat and why was it important to you to bring your group to our retreat in Mexico, Puerto Vallarta?
Elise:  Thank you!  Well, Xinalani has a fantastic location, which is totally ideal for a week of intense yoga practice, and it is eco-friendly which I feel is pretty important.

Xinalani: Tell us a little about how you found your practice.  How did it all start for you?
Elise:  Jane Fonda, actually.  I think I thought yoga could be a workout alternative but soon realized that something else was happening.  Something bigger.  Just to be clear, I wasn’t athletic by any means.  I was just self-conscious and confused.  From the tape I eventually got the courage to go to a “real” yoga class where other people would see me!  I was pretty worried about sticking out and looking silly and the teacher pointing at me, laughing, and announcing to everyone that I didn’t belong.  Happily, that isn’t what happened.  I think I was in some very gentle, very basic yoga class and was having a very hard time, but I made it through and afterward felt this sense of peace and clarity and I felt fantastic in a really clean way and knew I found something real that I had to hold on to.
Xinalani: What was it like to practice with Sri K. Pattabhi Jois ?

Elise:  I was really nervous when I first practiced with him in New York.  He really had this presence, this glow.  There were so many people in that room and it would get really quiet and you could hear his feet coming toward you… 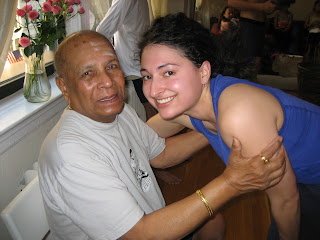 Xinalani: What is Mysore Yoga?  What about it draws you in?
Elise:  Mysore is a method of teaching yoga where students work one-on-one with a teacher over a long period of time.  Once your teacher shows you some things to work on, you practice them on your own with supervision and the teacher monitors you and helps you along the way giving you verbal queues, adjustments, asanas, etc.  It is a bit chaotic from the outside because there are a lot of students doing their practice at the same time and all of it seems so different.  One person is doing surya namaskar, another is resting, another something else… But it is actually quite organized.
It is really beautiful to watch students struggle and blossom and shine – to step into possibility and all of that. Of course, I am a student as well and go through all those same things and it is an amazing experience.

Xinalani: After years in NYC, why did you choose to leave such a large yoga community to head to a much smaller environment?
Elise:  New Mexico is a magical place.  The landscape is so vast, kind of moving in a way, spiritual.  I like being close to nature.

Xinalani: Tell us about your classes.
Elise:  Fun, honest, and probably sweaty.  The heart of the retreat will be the traditional Mysore practice with complementary workshops in the afternoons.  We’ll go over technique, tips, and tricks, theory… all that good stuff.

Xinalani: What is your mantra today?
Elise:  Love!

Xinalani: If you could change one thing about your past life, what would it be?
Elise:    I probably would have liked to be a little wiser but I suppose that “wisdom” implies “experience” so I guess I wouldn’t change a thing.

Xinalani: What is your main goal for the next year ahead?
Elise:  Read more books!

Xinalani: What will your group experience during your Yoga Retreat in Mexico?
Elise:  A thigh-slapping good time and a whole lot of sunshine.
Xinalani: If you could spread your love of life with the world, what advice would you give from your own personal experience?
Elise:  Follow your heart.

Xinalani: Is there anything you wish to share with our readers that we have not covered?
Elise:  Xinalani rocks!